Posted by Laura at Library of Clean Reads on June 07, 2013 in Audio books Rick Yancey sci-fi YA audio books YA Book Reviews | Comments : 0 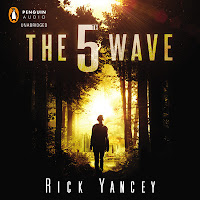 
Because I like dystopian novels, I was excited to try this sci-fi apocalyptic thriller that is getting so much hype. Only after finishing it did I realize it's the first book of a trilogy, although it's not indicated anywhere on the book. And although I enjoyed it, I have mixed feelings about it.

The Earth has undergone a series of attack waves that has left 7 billion dead and a few survivors. Because the Others (the aliens) look like humans it is difficult to differentiate them from humans causing people to trust no one. Cassie Sullivan has lost both her parents and is now on a mission to save her little brother. She meets Evan Walker, a mysterious teen, who lives alone after having lost his family too. He saves her life, shelters her, and offers to help her find her brother. Cassie is mistrustful, but she is alone and times are desperate. And then she understands what the 5th wave is all about and that changes everything.

Okay, there are a few things that worked for me and others that didn't. First, I listened to the audiobook and it was awesome. It was narrated by Brandon Espinoza and Phoebe Strole, both of whom did an excellent job. They captured the intensity and the emotional beat of this book, and their portrayals of the characters were very good. I enjoyed their voices and narration immensely.

Second, the characters are well-developed. This was almost a 500 page book, and although there was plenty of action, there was also plenty of introspection. Sometimes, it became a little too philosophical for my taste, though. I caught some of the biblical references made. Cassie is a strong character but there are times when I just wanted to shake her. She had a huge chip on her shoulder and was very angry, which I guess is  understandable after what she lived through. Ben and Evan were both likable, albeit also flawed characters that I could relate to more than Cassie. However, the little romance in this book is awkward.

Thirdly, I liked the way there were twists and turns that kept me wondering as to who really was the enemy, even though deep inside I knew. The author goes into great detail to describe the devastation the waves left behind, but it didn't clarify the reason all this was happening.

And that brings us to the storyline. There are plot holes. It was unclear why the aliens, with their huge mothership hovering over the Earth, didn't just kill the humans all at once. Why do it in waves? They certainly had the technology and the capacity to do it. And it's unclear as to why they had been tracking humans for thousands of years and now want to take over the Earth. The story is told from the point-of-view of several characters which stretches it out more than necessary and delays the suspense. I think Cassie and Ben's point-of-views would have sufficed.

Overall, I'm glad I listened to the audiobook. I think the book would have dragged at certain points for me. The ending leaves a lot of unanswered questions, so if you want to read this book know that it's the first book in a trilogy and not a stand alone.

Note: This book contains profanity--religious expletives, f-bombs and crude language, mainly when the characters are in combat training. There is also violence, with several bloody scenes, and children trained for combat.

Disclosure: Thanks to Penguin Audio and Audiobook Jukebox for sending me this book for review. I was not compensated in any other way, nor told how to rate or review this product.