Mailbox Monday and It's Monday, What Are You Reading? June 3 Edition

Posted by Laura at Library of Clean Reads on June 02, 2013 in Its Monday What Are You Reading? Mailbox Monday | Comments : 0 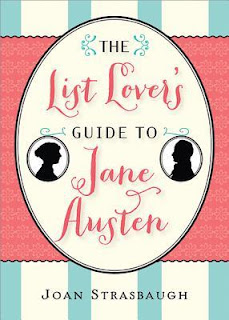 Her life, her work, her legacy—step into the world of the incredible Jane Austen.

It's Jane like you've never seen! Through fun and breezy lists, discover everything there is to know about Jane Austen, the sassy literary genius we know and love. Learn her likes and dislikes, her haves and have-nots, where she traveled, how she lived, and who she knew.

With a wealth of little-known and fascinating information, find out:

•Her friends and her beaux
•Every place she lived or visited
•Books in her library
•Her quirks
•The last lines of everything she wrote
•and much more! 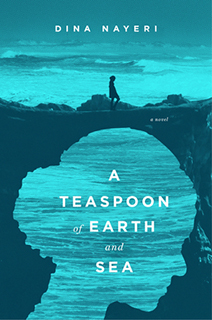 A Teaspoon of Earth and Sea by Dina Nayeri

Growing up in a small rice-farming village in 1980s Iran, eleven-year-old Saba Hafezi and her twin sister, Mahtab, are captivated by America. They keep lists of English words and collect illegal Life magazines, television shows, and rock music. So when her mother and sister disappear, leaving Saba and her father alone in Iran, Saba is certain that they have moved to America without her. But her parents have taught her that “all fate is written in the blood,” and that twins will live the same life, even if separated by land and sea. As she grows up in the warmth and community of her local village, falls in and out of love, and struggles with the limited possibilities in post-revolutionary Iran, Saba envisions that there is another way for her story to unfold. Somewhere, it must be that her sister is living the Western version of this life. And where Saba’s world has all the grit and brutality of real life under the new Islamic regime, her sister’s experience gives her a freedom and control that Saba can only dream of. 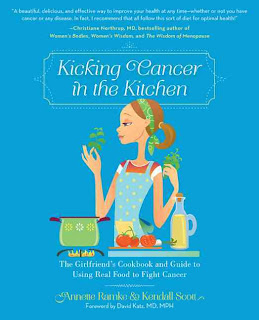 Kicking Cancer in the Kitchen by Annette Ramke & Kendall Scott

Kicking Cancer in the Kitchen is the ultimate resource for the woman who has been handed the cancer card--and for the one who never wants to get it. Authors Annette Ramke and Kendall Scott are cancer survivors, so they know exactly what it's like to deal with "the Big C." Here they share girlfriend-style, real-life knowledge and experience about the healing power of food, along with their stories of cancer ups and downs--with more than 100 recipes for fighting cancer and soothing symptoms of treatment. Whether someone is in the thick of "Cancer World" and wants to know what to expect, or for anyone who wants to do all they can to boost their health, Kicking Cancer in the Kitchen offers guidance on not only surviving, but thriving--before, during, and after cancer. 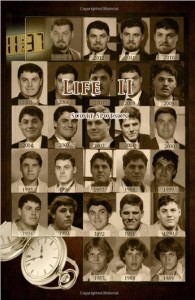 Upon discovering a 1958 book titled "Account of Time Travel on Earth Using Wave Theory," 42-year-old Max Thorning's life is thrown into chaos. Seeking answers to the book's cryptic clues, he discovers Dr. Time, a seemingly benign alien who has control of the Time Weaver, a remarkable device that can command any scene from the Earth's past. Dr. Time offers him a choice to go back into Time, to any point in his lifespan that he can vividly recall. The catch: he can only bring his memories, and can only live the future one day at a time. Follow Max's dilemma as he goes back to his 16-year-old self and tries to forge his destiny into a new one called Life II. 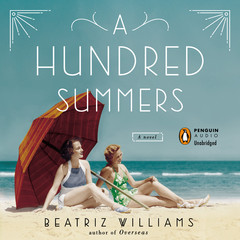 Memorial Day, 1938: New York socialite Lily Dane has just returned with her family to the idyllic oceanfront community of Seaview, Rhode Island, expecting another placid summer season among the familiar traditions and friendships that sustained her after heartbreak.

That is, until Greenwalds decide to take up residence in Seaview.

Nick and Budgie Greenwald are an unwelcome specter from Lily’s past: her former best friend and her former fiancé, now recently married—an event that set off a wildfire of gossip among the elite of Seaview, who have summered together for generations. Budgie’s arrival to restore her family’s old house puts her once more in the center of the community’s social scene, and she insinuates herself back into Lily's friendship with an overpowering talent for seduction...and an alluring acquaintance from their college days, Yankees pitcher Graham Pendleton. But the ties that bind Lily to Nick are too strong and intricate to ignore, and the two are drawn back into long-buried dreams, despite their uneasy secrets and many emotional obligations.

Under the scorching summer sun, the unexpected truth of Budgie and Nick’s marriage bubbles to the surface, and as a cataclysmic hurricane barrels unseen up the Atlantic and into New England, Lily and Nick must confront an emotional cyclone of their own, which will change their worlds forever. 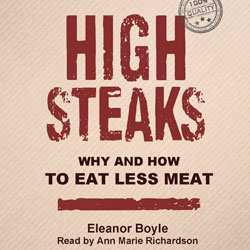 High Steaks: Why and How to Eat Less Meat by Eleanor Boyle (Post Hypnotic Press)

Each year the average North American ingests well over 200 pounds of animal protein, and the global appetite for meat has also increased dramatically. But feeding our meat addiction comes at tremendous cost. Maintaining our current level of consumption is ecologically impossible in the long-term, and undermines our personal health and community well-being.

High Steaks documents the disastrous consequences of modern large-scale industrial meat production and excessive consumption including:
Timely and compelling, this powerful book offers a modest, commonsense approach to a serious problem, suggesting strategies for all of us to cut back on our consumption of animal products and ensure that the meat we do consume is produced in a sustainable, ecologically responsible manner. At the same time, High Steaks describes progressive food policy shifts that will discourage factory farming and encourage people to eat in ways that support ecosystems and personal health. 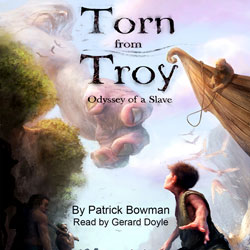 Torn from Troy: Odyssey of a Slave Book 1 by Patric Bowman

Two-and-a half millennia after it was created, Homer's Odyssey remains one of humanity's most memorable adventure stories. In this re-creation of Homer's classic as a young adult novel, we see the aftermath of the Trojan War through the eyes of Alexi, a fifteen-year-old Trojan boy. Orphaned by the war and enslaved by Odysseus himself, Alexi has a very different view of the conquering heroes of legend. Despite a simmering anger towards his captors, Alexi gradually develops a grudging respect for them. As the Greeks fight off the angry Cicones, weather a storm that pushes them far beyond charted waters, and nearly succumb to the blandishments of the bewitching Lotus-eaters, he realizes that they are not the demons they were said to be, but people like himself.

AudioGo is merging with Downpour.com. I got an email about this and because I was subscribed to AudioGo, they had a deal for me to get a free audio for switching to Downpour.com. This is what I chose: 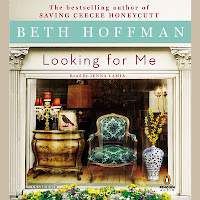 Looking for Me by Beth Hoffman

Teddi Overman found her life’s passion for furniture in a broken-down chair left on the side of the road in rural Kentucky. She learns to turn other people’s castoffs into beautifully restored antiques, and opens her own graciously-appointed shop in Charleston. Breathing new life into these discarded objects gives Teddi purpose, but has never alleviated the haunting uncertainty she’s felt in the years since her brother Josh’s mysterious disappearance. When signs emerge that Josh might still be alive, Teddi is drawn home to find him. It’s a journey that could help her come to terms with her shattered family—and to find herself at last.

If you're into YA audiobooks, Sync is now offering free audiobook downloads weekly throughout the summer! This was their first free audiobook courtesy of AudioGo. 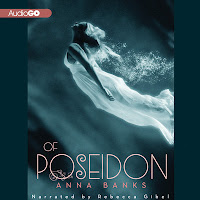 Of Poseidon by Anna Banks (courtesy of AudioGo)

Emma and her friend Chloe are spending their vacation in Florida. When Emma literally runs into a hot guy named Galen on the beach, little does she know he’s a prince of the Syrena. Galen and Emma both feel something strange—is it attraction?—and Galen suspects that Emma might well be the girl he’s heard of—a human who can communicate with fish. What follows is a deadly scene with a shark in which Galen witnesses Emma’s gifts. He must know more about her, and follows her back to New Jersey, and high school, to find out for sure if she’s the key to saving his kingdom. Soon, Emma can’t deny her feelings for him, but she can’t explain them either—and both she and Galen must learn more about where she comes from and what her powers are before they can trust one another and their feelings. 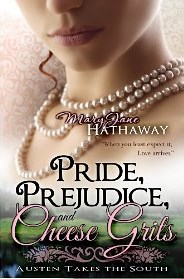 Shelby Roswell is a history professor on the fast track to tenure until her new book is crushed in a review by the famous historian, Ransom Fielding. She struggles to regain her momentum only to discover that Fielding has taken a visiting professorship at her college. The place that was once a refuge from the poverty of her past is now a battlefield of Civil War proportions.

Ransom is still struggling with his role in his wife’s accidental death six years ago and was hoping a year at Shelby’s small college would be a respite from the reminders back home. He never bargained for falling in love with the one woman who would give anything to make him leave. Together Shelby and Ransom learn that home is never very far away, and when you least expect it, love arrives.

With a cast of Civil War re-enactors, an evil wedding planner, antebellum mansions, and several mysterious diaries, 'Pride, Prejudice and Cheese Grits' will take you on a touching and hilarious ride through a modern South you haven't seen before. 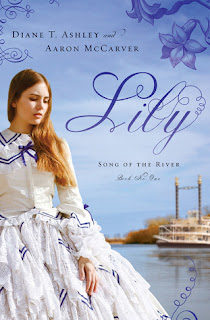 Lily (Song of the River) by Aaron Mccarver

Cruise down the Mississippi with Natchez belle Lily Anderson. Needing to provide for herself and her sisters, Lily is desperately trying to make a go of a riverboat venture with co-owner Blake Matthews. But they fail to find anything to agree upon. Blake is enamored of the feisty Lily. Attempts to woo her may be lost to the devious Jean Luc Champney. Will the siren song of the river evolve into a serenade or a somber lament?

Read and reviewed:
However Long the Night by Aimee Molloy

Still Reading:
The Firebird by Susanna Kearsley
The Fire Horse Girl by Kay Honeyman (with my daughter)
Travels with Gannon and Wyatt: Botswana by Patti Wheeler and Keith Hemstreet (with my son)

Still Listening to:
The 5th Wave by Rick Yancey