The Kashmir Shawl by Rosie Thomas

Posted by Laura at Library of Clean Reads on May 15, 2013 in Historical Fiction India kashmir shawl Rosie Thomas | Comments : 0 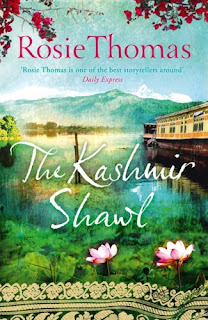 
Mair Ellis finds an exquisite shawl, the craftsmanship of which is unparalleled today, as she is clearing out her dead parents' house. Along with it she finds the lock of a child's curly hair. With her adventurous spirit, Mair sets out to find out all she can about the shawl which belonged to her grandmother. She traces it back to Kashmir, India, where her grandparents Nerys and Evan Watkins did missionary work. There she embarks on a quest that changes her life.

The story alternates with that of her newlywed grandmother Nerys in 1941 during WWII when she and her husband Evan live a simple life doing missionary work in a remote area of India. When Nerys suffers a miscarriage, Evan sends her with friends to rest in Kashmir, an exotic lakeside city, where the British dance, have affairs and gossip, while he travels on a missionary assignment elsewhere. There Nerys learns a lot about herself and what makes her happy. She becomes involved with three people who become key players in her life, Myrtle, Rainer and Caroline.

Although the book has a slow start and some slow parts throughout, Thomas is a great storyteller as she brings her story from the present to the past and weaves the two together. India is exotic and poor, and I learned so much about the fascinating art of shawl weaving. Both the present story and the historical one kept my interest. There is a scene in Mair's story that is heartbreaking. I also couldn't help but be reminded a little of The Great Gatsby as I read the historical one because of how the British socialized. The War affected the British society in India, and I can appreciate this was hard on wives whose husbands left to fight. It was touching to see how Nerys and Myrtle came to the aid of one of the women.

Nerys is a level-headed woman who is unsure about her faith except she loves her role in helping the children in the missionary post. She doesn't have a relationship with God, but she is kind and generous and self-sacrificing. But she does eventually engage in an affair with another man who falls in love with her. She feels absolutely no guilt about doing so and she gives no thought to what this relationship will mean to her lover, especially when her husband returns. This made me uncomfortable as it seemed that the book's message was that having an affair could actually spice up one's marriage and would not affect a woman's relationship with her husband. I could understand what drove one of the other women to have an affair but not Nerys. Her husband was not perfect but neither did he deserve to be cuckolded.

I can see that quite a lot of research went into the writing of this epic novel with storytelling that pulled me in and kept me turning the pages. I was invested in the story, but not always in the characters.

Note: This book is rated S = sex scenes, not too explicit and P = profanity for some religious expletives.

Disclosure: Thanks to the publisher and  from Author Marketing Services for sending me this book for review. I was not compensated in any other way, nor told how to rate or review this product.