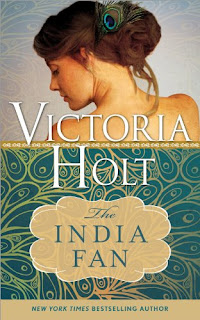 
This is the second book I read from Victoria Holt, and once again I am amazed at how she could sweep me away to another world inhabited by flawed characters, filled with action, adventure, mystery and romance. Although I must say the romance is not the main element in this book even though it's classified in this genre.

Drusilla Delaney is the rector's daughter, educated, sensible and plain, according to Lady Harriet of Framling House who reigns supreme over their English village. Lady Harriet allows Drusilla to become a companion to her radiantly beautiful, sensual, but flight daughter Lavinia throughout their childhood, even making sure they attend the same schools so that Drusilla could keep an eye on her. Lavinia's brother Fabian, a brooding and dominating man, is attracted to Drusilla's intelligence, kindness and courage. Their lives intermingle from childhood to adulthood and become entangled in India in a way that will change all of their three lives forever.

I really enjoyed the way Holt deftly builds the characters of Drusilla and Lavinia in this gothic tale that spans the lives of two very different women from their childhood in a village in England, to the châteaus of France and finally the perils of exotic India. I cannot say that I liked Fabian much. He began as a spoiled and haughty child who turned into a man consumed with his work. He kept to himself, and I did not get a full sense of who he was. There is not much interaction between them that made me understand what attracted them to each other except circumstances. However, even though the romantic element wasn't great, I still really liked the story as a whole because it was unpredictable and kept me turning the pages to see what further adventures Drusilla would end up in.

I did wonder if it was intentional that the author gave the beautiful Lavinia a nice-sounding name and always described what she was wearing and how gorgeous her hair was styled but barely made mention of Drusilla's wardrobe or looks. I had a hard time picturing her, and with a name like Drusilla? (ugh!) Anyhow, the message was clear that Lavinia was beautiful only on the outside, but Drusilla on the inside.

Victoria Holt is quite the storyteller and if you enjoy historical fiction and have yet to read any of her books, I suggest you try this one. It will not disappoint.