The Fault in Our Stars by John Green

Posted by Laura at Library of Clean Reads on January 15, 2013 in death John Green YA Book Reviews | Comments : 0 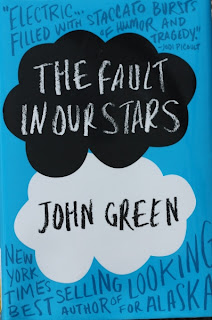 
Refreshing, heartbreaking, intelligent, funny, tragic...This novel is all this and more. After waiting so long to read this book that caused quite a stir last year, I finally made myself a promise to read more of the books that make my heart beat faster when I see them on other blogs. This was one of them.

Seventeen year-old Hazel Grace Lancaster has thyroid cancer that spread to her lungs. She's hooked up to an oxygen tank and carries it with her wherever she goes. Battling cancer since she was thirteen, Hazel has few friends, rarely leaves the house and reads the same book over and over, idealizing the author's ability to know what it feels like for a kid to suffer cancer. Everything changes when she joins a support group and meets gorgeous and charismatic Augustus Waters who describes himself as having “had a touch of osteosarcoma a year and a half ago”.

One of the things that impressed me the most about Green's novel is that the story seems deceptively simple—boy meets girl, boy falls in love with girl, both are dying, now what? But this book is far from simple, starting with the vocabulary these kids spoke, which sometimes was over the topic, but honestly I didn't care. Hazel's story really kept me going. They were bright and not your typical teens, yet teens nonetheless with their need for normalcy (because it didn't exist) and for their parents who were very present and supportive throughout. Yay, for a teen book that doesn't kill parental authority and wisdom!

Green does a great job of taking us on a special journey through Hazel's point-of-view. We get to see what it's like to face death on a daily basis both for a young person who has barely begun to live and for parents who know that eventually their child will succumb to death. Hazel is a smart and wise kid who wants to protect her parents from the pain her illness is inflicting on them. This weighs heavily on her tiny shoulders and the friendship she develops with Augustus and also Isaac, another teen who eventually goes blind from his cancer, helps her to be a kid again. Although she and Augustus fall in love, this is not a romance novel.

The prose is refreshing, the storyline reflective, and the characters unique, especially Peter Van Houten, the washed-up author, whose speech was mostly incomprehensible, as he hid his pain behind long and complicated words. Augustus and Hazel learn from each other. Their friendship is beautiful. I read and reread the last few paragraphs in the book because they summed up the depth of what that friendship accomplished. A truly anomalous and exceptional book that made me shed quite a few tears.

Note: This book contains profanity, including religious expletives, especially G*d*mn, which I found disappointing in a YA book, one f-word, and some crude language. There is also a short sex scene between teenagers, not explicit. Christians may find some of the religious references in the first few pages unfavorable.