Jane and the Unpleasantness at Scargrave Manor: Being the First Jane Austen Mystery by Stephanie Barron 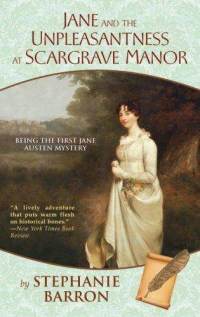 Jane Austen goes to visit her dear recently-married friend, Isobel Payne, the new Countess of Scargrave, just home from her honeymoon. A few hours later Isobel’s husband dies an agonizing death and suspicion is cast on Isobel, who is promptly jailed in the infamous Newgate Prison. Jane Austen must now act the sleuth in order to free her friend from a probable death penalty. And that is basically the story, but what a story! There are plenty of red herrings, twists and turns to the plot, and a completely surprise ending.

The writing is so witty and insightful that the reader almost forgets that it isn’t J.A. herself. She certainly writes in the style of Jane Austen, using the flowery language of the time, that makes the story that much more believable. Whereas you or I might say, “I’m crabby because I didn’t sleep last night;” the author says “one consequence of broken sleep is assuredly diminished civility.” To add to the “feel” of authenticity is the use of lines straight out of some of Austen’s own novels. For instance, in reply to a dashing, mysterious Lord Harold, Jane says “your lack of finer feeling, of scruple and honour – of everything, in truth, that turns a man a gentleman – makes you the very last person I could ever be prevailed upon to marry.” (Pride and Prejudice)

I think Jane Austen fans will enjoy the book. Who better than Jane, with her keen understanding of human nature, to solve a mystery!

This book is the first of nine novels with J.A. as heroine. I’m already a fan.

Disclosure: I bought this at a second-hand bookstore in Burlington, Vt. I was not compensated in any other way, nor told how to rate or review this product.