The Jewels of Paradise by Donna Leon (Audiobook Review) 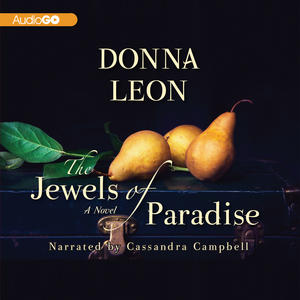 Caterina Pellegrini is a Venetian scholar of Baroque opera who returns to Venice from the United States when she is hired as a researcher to examine the contents of two eighteenth-century trunks belonging to a forgotten Baroque composer. The two greedy cousins who hire her for the job expect the documents held in the trunks to lead them to the treasure that has been rumoured by their family to exist. As Caterina delves into the contents, clues lead her to discover something that doesn't surprise her in the end.

I was captivated by the story from the moment I began to listen to it because of the narrator's melodious and mesmerizing voice. Cassandra Campbell captures the Italian accented voices of the characters so well, but even more than that, she captures the wit and satire of Leon's prose. Her Italian reading was good, only sometimes off in pronunciation. However, she never stumbled over the many difficult foreign names of the historical figures that came up from the research the main character did. I'm almost sure I would not have enjoyed this book half as much if I had read it.

I particularly liked the characters of Caterina and her sister. The dialogue was witty and I hung on every word. I loved the description of Venice and its streets, the Italian lifestyle, and the famous Biblioteca Marciana that came to life when Caterina went to do research there. I also loved learning more about operas and music and how a researcher goes about the fascinating but tedious work of reading old documents.

The mystery itself, though, was a little bit of a let down. Oh, I thought the ending was perfect, and Leon does throw us clues along the way so that it doesn't come too unexpected. However, the story itself builds up to something ominous, what with Caterina being followed by a man who scares her, the lawyer who seems to have his own agenda—which is not clarified at the end—and the overall sense that something more and bigger than the two cousins are involved. Maybe some sort of conspiracy...but nothing like that happens. The mystery really is only about what is in the trunks. That's it. A few things were left unresolved for me, and I thought this was too bad after the wonderful buildup that promised more than it delivered.

If you like a well-written story with intelligent characters set in history-laden Venice, and don't mind a mediocre plot, I suggest you try this audiobook, if only to listen to the talented Cassandra Campbell as her voice immerses us into Venice and the world of a Baroque composer.

Note: This audiobook is rated C = clean read, except for a few religious expletives in Italian.
I will count this book toward the following challenges: I Love Italy Reading Challenge and the Mystery and Suspense Reading Challenge

Disclosure: Thanks to AudioGo for sending me this audiobook for review. I was not compensated in any other way, nor told how to rate or review this product.