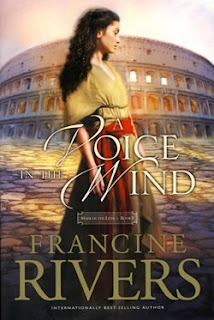 This epic novel sweeps us into the tumultuous time when the Roman Empire ruled with an iron fist and the first-century Christians were still in the early stages of Christianity's inception. I loved reading this novel. The cover and synopsis hooked me right from the start. This novel swept me away to a time in history I have studied intensely, but it also frustrated me. How can I both love a book and be frustrated by it? Read on.

The story opens up with the destruction of Jerusalem in 70 C.E. Hadassah, a young Jewess whose family converted to Christianity, has travelled with her parents and younger brother and sister from Galilee to Jerusalem and became trapped when the Romans besieged the city. All of her family dies and she is captured to be sold as a slave in Rome. She finally ends up the slave girl to Julia, the daughter of an aristocratic family in Rome, the powerful city where Christians are hated and fed to the lions in the arenas. The story focuses on three main characters—Hadassah, who eventually learns not to fear her Christian identity, Marcus, brother of Julia and a Roman aristocrat who becomes disillusioned with his lifestyle, and Atretes, a fierce German warrior captured by the Romans and trained to become a gladiator against his will.

There is so much to say about this novel, I don't know where to start. I will begin by what I loved about it followed by what I did not.

What I loved:
What I did not like:
A Voice in the Wind is the first book of the Mark of the Lion trilogy and the ending left me wanting more. It's a good thing that the end of the book contains a preview of the second book in this Mark of the Lion series, Echo in the Darkness. After reading it I wanted to buy it right away. The author is truly an amazing storyteller, and as you can see from my extensive review, it has struck a chord with me. Although I has issues with some of the things included in this book, it was well worth the read.

Note: This book is rated V = explicit violence and S = many sexual references.
I will count this book toward the following challenges: A-Z Book Challenge, I Love Italy Reading Challenge