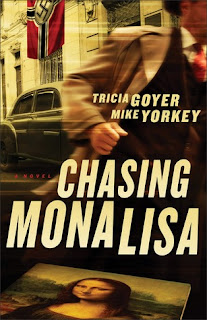 
When I read the synopsis for this book, I knew I wanted to read it. It's August 1944 and Paris is on the cusp of liberation. The Nazis who have been stealing priceless art work are now after the Mona Lisa and OSS (Office of Strategic Services) agents Gabi Mueller and Eric Hofstadler are assigned to retrieve the famous painting from its hiding place and return it to the Louvre. I had high expectations for this book, and although I enjoyed it I had some issues with it.

The story begins with a prologue, and we are introduced to Bernard Rousseau who becomes a hero as a member of the Resistance. We also meet, Colette, his girlfriend who works as a curator at the Louvre. These characters are central to the story and their feelings portray much of what Paris has suffered through the Occupation. The agents, Gabi and Eric, were characters from The Swiss Courrier, who are now on their second mission in this second book. I did not read the first book, and therefore felt a lack of depth in their characterization. I did not feel this was their story at all, but that of Bernard and Colette, which really dealt with the war, their loyalties and their patriotism. Which I was happy about, except for their unresolved ending! My emotions were invested in them and not Gabi and Eric.

The chase for the Mona Lisa only truly started halfway through the book. And half the time I was frustrated with Gabi and Eric's poor decision-making. I had a hard time seeing them as agents. Gabi finds a book hidden in the false bottom of a safe stolen from the Nazis and she decides to put it aside to look at later. Really? She actually forgets about it until later in the story when it becomes convenient to find it. The chase is not really a chase because they dilly-dally, instead of running with the painting. Again poor decision-making that made me want to slap some sense into them. They could have prevented what happens later, but instead their actions just gets more frustrating.

Thank goodness the ending was good. I liked the twist, because until then, the whole story was pretty predictable, with the authors spelling everything out for me. I kept thinking, couldn't you have let me guess that? Furthermore, Gabi's father, who was a top agent was also a congregation pastor. This didn't jive with me. Isn't his role to preach salvation by God's kingdom and not organize rescue missions involving ruthless criminals with possible killing involved?

So the premise of the book is really good, but the plotline could have been better. It was not as exciting as the book cover (which I love!) led me to believe. However, it has stirred up my interest in the Mona Lisa and her history during the two world wars. The authors include in their acknowledgments the names of a few books that caught my interest. I will be doing more research.

Note: This book is rated V = violence, for descriptions of horrific killings and brutality against a child. I found the violence a little over the top for a Christian publication.