Mailbox Monday and It's Monday What Are You Reading? for July 9

Posted by Laura at Library of Clean Reads on July 08, 2012 in Its Monday What Are You Reading? Mailbox Monday | Comments : 0

Mailbox Monday was created by Marcia who now blogs at Mailbox Monday. It is the gathering place for readers to share the books that came into their house last week. Jennifer at Mrs Q Book Addict will be hosting for the month of July. You can also view the touring blog list here for the upcoming months.

This is the story and work of a remarkable woman. Barbara Arrowsmith-Young was born with severe learning disabilities. Undaunted, she used her strengths to develop brain exercises to overcome her neurological deficits. Not only did she build herself a better brain, she developed a brain training program that has helped thousands of others do the same and changed countless lives. Young’s work is one of the first examples of the extensive and practical application of “neuroplasticity.” As the individuals described in this book change their brains, readers see how the brain works and what a profound impact improved mental capacity has on how we can participate in the world. Here her personal story is interwoven with fascinating accounts of the clinical mysteries and triumphant stories that Barbara has encountered during her career. 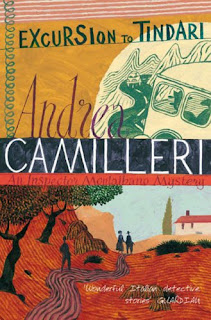 A young Don Juan is found murdered in front of his apartment building early one morning, and an elderly couple is reported missing after an excursion to the ancient site of Tindari - two seemingly unrelated cases for Inspector Montalbano to solve amid the daily complications of life at Vigata police headquarters. But when Montalbano discovers that the couple and the murdered young man lived in the same building, his investigation stumbles onto Sicily's brutal "New Mafia," which leads him down a path more evil and far-reaching than any he has been on before.

Read and reviewed:
And Laughter Fell from the Sky by Jyotsna Sreenivasan
Don't Laugh at Giraffe by Rebecca Bender
Mom, I Fired the Babysitter by Colleen H. Robley Blake

Currently Reading:
The Conjugations of the Verb To Be by Glen Chamberlain
Evertaster by Adam Glendon Sidwell

Listening to:
The Woman Who Changed Her Brain by Barbara Arrowsmith-Young (Fascinating!)
Delirium by Lauren Oliver (Loving it)