This week is Audio Book Week hosted by Jen over at Devourer of Books. I have been following her discussions and also those with Sheila at Book Journey about all aspects of audio books and it has gotten me really excited about listening to audio. I had tried twice in the past and gave up, but when I saw the audio version of The Dressmaker at the library I decided to try it. It has changed my view of audio books! Here is my very first review of an audio book. 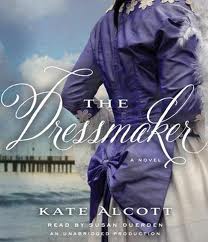 
I don't know that this book would have the same effect on me if I had read it rather than listened to it. I loved the story, which was about Tess Collins, an aspiring seamstress who is hired as a maid by famous designer Lady Duff Gordon. She travels on the Titanic and they both survive on different lifeboats. But stories are revealed of how Lady Duff Gordon may have saved herself at the expense of others. Tess is torn between loyalty to her employer and Jim Bonnie, the sailor who was on the same lifeboat as Lady Duff and who knows what really happened that fateful night. The trial case that follows the sinking was suspenseful and it was insightful as to why most survivors were reluctant to talk about that night. Survivor's guilt is one of the strong themes in this novel. But it's also about starting over, following your dreams, becoming an independent woman, and standing up for what one believes.

Initially, I had to adjust to listening to a story rather than reading it. So I found myself focusing more so as not to miss a word. It was hard at the beginning but gradually got easier. Duerden does an amazing job of changing voices for all the characters until I could easily recognize them and conjure a picture in my mind of what they were like based on their description, voice and actions. Initially, I disliked Tess's voice. It seemed too young, almost childish, but it got better as her character was built. Also, the narrator ended every sentence with a rising inflection that I found annoying, but that gradually got better, either because I got caught up in the story or because I became much more fascinated by the facility and skill with which the narrator switched tone, pitch and inflection with each character.

Lady Duff Gordon was a formidable character and her voice suited her so well, better than anything I could have come up with in my mind if I were reading the book. She sounded so much like the middle-aged haughty aristocratic lady. I also loved Jim Bonnie's voice, his accent, and the emotion the narrator succeeded in giving it. Wow! She succeeded in making me fall in love with a sailor! He chose to do the right thing even at the expense of his reputation and livelihood. He was morally good and handsome to boot.

I've read negative reviews about this book regarding inaccuracies, such as the fact that Tess was a farm girl, yet did not speak like one and adapted too easily with the upper class. I have to agree with this and some other things that came too easily to the main character. But I was able to suspend disbelief because I loved the premise of this book. It's fiction after all. The author and narrator were able to transport me to the turn of the century among the upper class on a majestic ship and in America where women were protesting for change, especially the right to vote. Tess grew as a character. Pinky Wade, the reporter, was another character I liked because she represented the independent woman voting for change.

So for me, the audio book of The Dressmaker has opened up a new love for books. It has made me want to start listening to audio books on a regular basis. If you are hesitating about audio books or did not like your previous experience, perhaps this historical fiction revolving around the Titanic, with a sprinkling of romance propelled by strong female characters will change your mind. It did for me.


Note: This audio is rated P = profanity. There are a few religious expletives.


Disclosure: I borrowed this audio from the library. I was not told how to rate or review this product.