By The King's Design by Christine Trent 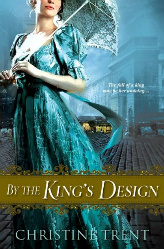 This is the third book I read by historical novelist Christine Trent. Both The Queen's Dollmaker and A Royal Likeness were books that transported me back in history, making me see it through the eyes of strong heroines “with unusual professions”, as the author puts it. Yes, this is what I love the most about Trent's books; the main characters are tradeswomen who somehow get involved in some way with real-life historical figures.

This time we meet Annabelle Stirling, an ambitious draper (a cloth merchant) who was trained by her father since childhood. After her parent's death, Belle runs her father's shop while Wesley, her irresponsible and wayward brother, has little interest in it. Circumstances lead Belle and Wesley to London, where Belle sets up a draper shop and starts over with some help from her brother. Belle comes under the patronage of Mr. Nash, the architect to the Prince Regent, who later becomes George IV, and she is privileged to assist with the decoration of the King's Royal Pavilion in Brighton.

The story is set at the brink of the Industrial Revolution, spanning almost ten years from 1812 to 1821. I must say, Trent once again brought history to life with the events of this time. As in her other novels I learned about two trades, this time: cloth manufacture and cabinetmaking. She also brought to life George IV so well as an obese, pompous, manipulative and selfish monarch that it was easy to see why he was so disliked by his subjects. Her descriptions of the places and historical figures were so alive that I could picture this novel as a movie.

Although Belle was a strong and intelligent woman there were times I just didn't understand her behaviour, especially vis-a-vis Wesley, who was involved in treason. She wanted to improve her relationship with him and yet she was so ambitious and strove to be her own women that she was oblivious to her brother's actions (or refused to see them) and even pushed away the romantic and respectable advances of Putnam Boyce, a man who respected her trade and independence. Sometimes, I was frustrated with her. But she had a good heart, worked hard and generously helped the poor in times of great need. I also thought her last decision regarding her business was brilliant.

Trent included a few scenes with characters from her previous novels (Colette and Mme Tussaud) which I thought was fun. I wished Belle would have made friends with Colette earlier though, seeing that their shops were close to each other. And I would have liked Putnam's marriage proposal staged at a more appropriate time (other than right after Belle kills someone in self-defense--wasn't she in shock?) as it overshadowed the fact that he finally gets the girl after trying for several years!

I loved reading the author's note at the end of the book that gave more details of all the historical figures included in this story. Trent is a meticulous history buff and her novels truly reflect this. I look forward to reading her next novel.

Note: This book is rated S = sexual scenes. There are scenes involving opium drugs and adultery (not explicit).
I will count this book toward the following challenges: A - Z Book Challenge

About the author:
Christine Trent writes historical fiction from her two-story home library. She lives with her wonderful bookshelf-building husband, four precocious cats, a large doll collection, entirely too many fountain pens, and over 4,000 fully cataloged books. She and her husband are active travelers and journey regularly to England to conduct book research at historic sites. Christine Trent's novels include The Queen's Dollmaker and A Royal Likeness. She is currently working on her 4th novel, Lady of Ashes, which will be released in 2013.

Disclosure: Thanks to the author and Amy from Historical Fiction Book Tours for sending me this book for review. I was not compensated in any other way, nor told how to rate or review this product.