Circuits of the Wind by Michael Stutz (Review and Giveaway) 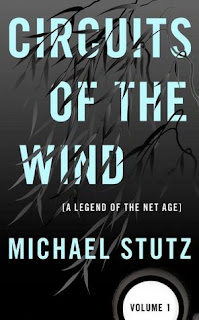 This is volume 1 of a trilogy about Raymond Valentino growing up in the mythic city of Clifton, USA in the 70’s. Ray is mesmerized by technology. At an early age he is fascinated by mechanical things, first the telephone, that wonder so complex and technological and so suggestive of another world; then household appliances, like a Sunbeam electric blender with its tantalizing buttons; a mixer “parked up upon the counter sleek and white as a moon rocket” ; an automatic coffee pot “that would stare down at him in bold authority”; the console record player with its robotic arm; and, of course, the television set , “a complex robotic box whose outer limits were unknown” All of these wonders enthrall young Ray and set him on the road toward what would become the focus of his life, computers, early “chat rooms”, and hacker boards.

“Raymond learned all the details of what it meant to be a hacker, someone who was a master at manipulating through this hidden world of wires, who knew all about telephones and computers and technology. They were the ones who could open all the doors, who traversed the secret corridors, who connected and who wandered far – which had been the very thing that Raymond had always been after.” And so Raymond becomes a wanderer on the wires.

In some respects the book is a retrospective of technology as seen through the eyes of a young boy. It’s the kind of life that one imagines Bill Gates or Steve Jobs living. I found it a little sad as Ray becomes increasingly addicted to hacking and to contact with unseen people, always with the idea of reaching for something “out there” that is beyond him, so convinced that everywhere else is better than where he is, everyone else’s life is better than his. Meanwhile, a widening gulf exists between him and his real-life friends.

The descriptive passages in the book are funny, true to life and quite lyrical. Michael Stutz has an amazing ability with words, despite his liberal use of conjunctions such as I’d, there’d, she’d.

Read this book to learn the story of the beginning of the “net” generation. I believe Circuits of the Wind will be savored by “techies”, “geeks” and computer “nerds”.


And now for the giveaway!
Entering is easy. Giveaway rules:
Mandatory:
1) Leave a comment as to why you want to win this book and include an email address.

*Buttons for following found on top left-hand corner of blog.
*Giveaway ends February 5, 2012.
*Giveaway open to Canada and US.
*Please read our Giveaway Policy before entering our giveaways.

Disclosure: Thanks to Renee from Confiteor Media for sending me this book for review. I was not compensated in any other way, nor told how to rate or review this product.