The Sherlockian by Graham Moore 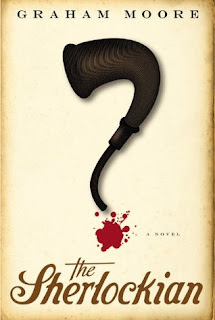 I’m a great Sherlock Holmes fan, so while browsing in a bookstore in New Hampshire the title caught my eye. I read the publicist’s blurb on the book jacket and was immediately captivated.

Part of the novel is set in 1893 to 1900 and 2010 which means that it switches back and forth between the narration of Arthur Conan Doyle (Sherlock’s creator) and a present-day would-be sleuth and Holmes fanatic, Harold White. The historical part sees Arthur Conan Doyle decide to “kill off” or stop writing about the adventures of Sherlock Holmes. Apparently newspaper headlines of the day read “FAMED DETECTIVE PERISHES” so much was he part of the public’s lives. The modern story centers on the search for Conan Doyle’s lost diary in which he describes his reasons for “killing off” Sherlock Holmes. Then, suddenly, a murder takes place in 1900 and in the present and as Sherlock would say, “the game’s afoot.”

This book is fast-moving, funny, and lively. Each chapter starts with a quote from a Sherlock Holmes book. The descriptions are delightful, ie. “her light blue dress made her appear to be a bit younger than she probably was. She wore a pink and yellow banded scarf around her neck, making her look, for a second, like an unwrapped bonbon.” Or what about “Jeffrey turned around, back to the podium, allowing his calm to massage the room.” Even better “the digits of your mother’s old telephone number recalled, magically, from some moss-covered Precambrian mental arcadia.” And finally, “snow blanketed the top third of the range like a white silk shawl.”

I was impressed with the amount of knowledge about Holmesiana possessed by the 28-year-old author. In the voice of Harold White the author says “Can you write a mystery story that ends with uncertainty? Where you never really know who did it? You can, but it’s unsatisfying. It’s unpleasant for the reader. The reader needs to know. Justice is optional, but answers are mandatory. And that’s what I love about Holmes. That the answers are so elegant and the world he lives in so ordered and rational.” By the end of the book we agree with that observation as the mysteries at the heart of the story are all resolved and we know.

There are a few expletives in the book but essentially it is a clean read.

Disclosure: I bought this book and was not compensated in any way, nor told how to rate or review this product.