The 39 Clues Cahill vs Vespers Book 1: The Medusa Plot by Gordon Korman 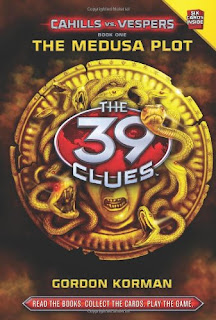 
The first series of The 39 Clues (a groundbreaking program of books, game cards and interactive website) was so good that I had to wonder if a second series could live up to it. Well, I'm happy to say, yes! This new series (6 books total with more cards that unlock online missions) is typical of the 39 Clues trademark—the same brother and sister team, non-stop action-adventure, brilliant and exciting missions, and high stakes.
It's been now two years since Dan and Amy finished the race for the 39 clues that led them to the source of incredible power. But a new organization has sprung up, one Amy and Dan knew would eventually hunt them down: the Vespers. Not family-related like the Cahills but a ruthless group that would stop at nothing to get what they want.
Fifteen-year old Amy and thirteen-year old Dan don't exactly know what they are after. All they know is that members of the Cahill family were kidnapped and they have to fulfill a difficult ransom request or their captured friends will start dying. This mission takes them to Florence and then Rome as they try to figure out how to complete it and bring the hostages home. Filled with adventure and puzzling situations, I was glad to hop on the journey with them, especially as I learned more about Roman history and Italian renaissance art. Oh, I was so in my element with this setting!
Needless to say, it was suspenseful and thrilling. Korman's writing is excellent, the pace, plot and character development even better. A few new characters were introduced (I liked them!) and some events from past books mentioned. I still marvel how a handful of writers could keep the story flowing smoothly from book to book. Book Two will be released in December with Jude Watson as the author and the last book will be written by David Baldacci, scheduled for release on March 26, 2013. So from this first book and the cast of writers, I think it safe to say this second series will definitely rock!
I will count this book toward the following challenges: Middle-grade Book Challenge, Italy in Books Challenge


Disclosure: Thanks to Nikole Kritikos from Scholastic Canada for sending me this book for review. I was not compensated in any other way, nor told how to rate or review this product.