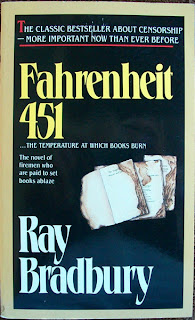 
This dystopian classic novel published in early 1950s is about a futuristic society that bans books and burns them. Guy Montag is a fireman whose job it is to burn these books and the houses that hold them. He has never questioned his job until one day his new neighbour, 17 year-old Clarisse makes him think about things he has never thought about. Her curiosity and love of life stirs up a deep sadness and anger in him that sets in motion a series of events that lead to the beginning of change for society and Montag himself.

I liked this book. I appreciated how accurate Ray Bradbury portrayed some aspects of a society fifty years into the future—a society in which I am now living. It is a society in which large screened TVs are like family members, children are barely tolerated, and suicide is so common, it is mainstream. Montag is a likable character and his change propels the story forward at a good pace. The other interesting characters were Beatty, the chief fireman; Faber, a secret book lover waiting for the right person who would initiate change; and Clarisse, who I would have loved to know more about.

I especially liked that the author used the Bible as one of the banned books featured in this story, which really should not be all that surprising since it was, and still is in some areas, one of the most banned books in history. Who can forget those horrifying depictions of people in the Middle Ages being burned with a copy of the Bible hanging around their necks? Even today I know of countries where religious literature is banned and confiscated with those who own them placed in jail. In the 21st century? Shocking, I know.

Compared to today's dystopian novels this one is fairly tame, with little violence. The chase scene is suspenseful but not heart-pounding. It is the perfect book to discuss the ethical issue of controlling one's freedom to read and educate himself. This book was one of our book club selections. It makes for a great discussion with a mixed bag of feeling. Some loved it and some did not and others did not even bother reading it. For my part, I am glad to have read it.

Note: There is some mild profanity.

I will count this book toward the following challenges: Dystopian Challenge, Support Your Local Library Challenge