A Race to Splendor by Ciji Ware 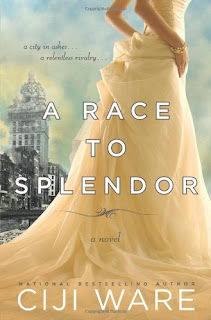 
This book has a fantastic setting. It takes place during the aftermath of the 1906 San Francisco earthquake. With the horrific events of the earthquake and tsunami in Japan unfolding at the same time as I was reading this book, I began to have a greater appreciation for what the residents and city builders of that time in San Francisco had to go through. How appropriate that this novel is being published during the 105th anniversary of the San Francisco earthquake.
The author's meticulous research certainly comes through as she brings to life the challenges of living after that tumultuous earthquake and subsequent fires that destroyed 400 city blocks and left 250 000 refugees homeless for up to two years. The novel, though, dwells mainly on the atmosphere and lives of those who wanted to rebuild the historic and splendid buildings on Nob Hill where the rich frequented.
Amelia Bradshaw returns from Paris where she has just completed her architecture degree and learns that her beloved Bay View hotel was gambled away by her father to J.D. Thayer, the black sheep of a prominent San Francisco family. Although Amelia tries to get her inheritance back, the earthquake changes everything when the hotel is destroyed and she is on the team of architects hired to rebuild it. What ensues is a race to finish it by the first anniversary of the quake. Although the book synopsis focuses on her becoming a rival to her mentor and first licensed female architect in California, Julia Morgan, I found the book to be much more than that.
It's a story that explores the changes that women's role underwent as they took on professions reserved for men. It was the beginning of the twentieth century and a new era. Amelia was independent-minded, smart and innovative. She was not portrayed as a beauty who fussed over her clothes and an easy lifestyle. She worked hard and believed she could make a difference to rebuild her city and fight the injustices against women and Chinese immigrants.
The book also explores the corrupt politicians and lewd secret exploitations of the rich as they supported brothels set up with kidnapped boys and girls from China. This theme is very dominant as it affects Amelia and Thayer as they work to rebuild the hotel and deal with setbacks and each other's distrust toward one another. The Chinese sexual abductions is a mature adult theme and there is a scene that may be disturbing for some. There are also two sexually explicit scenes in this novel. The novel contains several subplots but they are handled well and not difficult to follow. The rich historical setting is key, though, and made this a very interesting read for me.
Sometimes, I was confused with the relationship between Amelia and Thayer. There was an attraction between them, as they worked closely together, but the fact that he had gambled the hotel from her father was an obstacle between them, and then it was not. And then it was, and then it was not. This was frustrating so that when she succumbs to him physically, I was not impressed, because then they go back to distrust again. Their romance was not a highlight for me, although I liked their relationship better as the novel came to an end. I appreciated their qualities as well as their flaws, though, and thought they were both great characters.
For me, the story itself was a winner. I also thoroughly enjoyed reading the author's note and her acknowledgements as they were filled with expressions of her inspiration for this story and the historical research she did that brought about A Race to Splendor, which I think is an ode to courageous and extraordinary women who have contributed greatly to history but have largely been ignored.
I will count this book toward the following challenges: Historical Fiction Challenge