The Landing by John Ibbitson

Posted by Laura at Library of Clean Reads on March 04, 2011 in Young Adult Book Reviews | Comments : 3 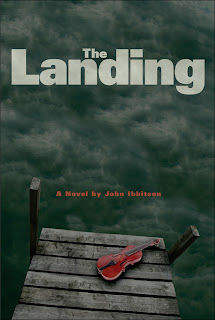 I picked this book up at my local library after reading it earned the 2008 Governor General's Literary Award. I'm making an effort to better support Canadian literature, and I wasn't disappointed with this YA historical fiction novel.

The story takes place during the Great Depression in the 1930s when 15 year-old Ben Mercer and his mother are now living at Cook's Landing on Lake Muskoka in Ontario with their bitter Uncle Henry after Ben's father died six years earlier. Life is hard as the family tries to make ends meet. Ben escapes by playing his violin, a passion he developed and that his parents encouraged, but his Uncle does not. Ben is miserable and feels trapped thinking he will probably spend the rest of his life living like his Uncle. But things change when a wealthy New York widow moves into the cottage across the lake and hires Ben to fix it up. Ben is exposed to another world as he sees how she and her rich visiting friends live.

One of the first things that struck me about this book was the historical setting. Ibbitson captured the Depression and its impact on the inhabitants of Ontario's shores without writing a morose story. It is a coming-of-age hopeful tale and I enjoyed every minute of it. Ben reminded me of my own son, who is also blond and plays the violin. Music is almost a character itself as it influences Ben's life. I absolutely loved the author's description of music pieces. Music lovers will relate.

Ruth Chapman, the wealthy widow also plays an important and breath-of-fresh-air part with her worldly ways that are part warning and part inspirational for Ben and his mother. I was able to picture the characters easily as Ibbitson brought them to life. Both she and the Uncle are complex characters with more to them than meets the eye. Ben begins to understand more as he struggles with his own feelings.

There are scenes of heavy smoking and drinking, as was prevalent among the cultured rich in that era. For those readers sensitive about language there are a few incidents of profanity.

This was a thoughtful and well-written story. Ibbitson is one of a few authors who can use the em dash (--) frequently because he uses it well. Here's an example:

The sun had set, but only just, with the sky still light and kids still chasing each other from yard to yard, as they walked past mostly white-painted wood-frame houses—though the Timson place was brick, “'cause they've made money,” as his father had once explained—and his mother took his other hand as an old jalopy wheezed past.

This is not a long novel but it has a quiet sort of impact. All the while I was reading I kept wondering how it would end. It's a profound look at growing up in hard economic times and the emotional struggle of making life choices—something almost everyone can relate to.

I will count this book toward the following challenges: YA Reading Challenge, Support Your Local Library Challenge, Historical Fiction Challenge