The Egg and I by Betty MacDonald 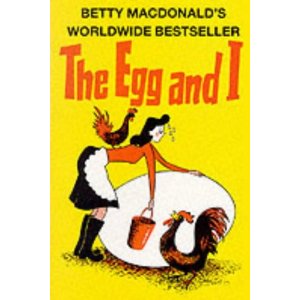 
The Egg and I is a funny memoir about a woman who follows her husband on his quest to become a chicken farmer. It was originally written in 1945, became a bestseller, and has been reprinted several times. This was a book chosen for my book club read, and I was looking forward to some good laughs. I have to say there were some really good laugh-out-loud moments and the author is a good writer, but overall, the descriptions of farm life made it a tedious read for me.
The book has a slow start, and the author does not relate the two years or so she spent in the Olympic Mountains in chronological order but rather by seasons. Sometimes this made her story hard to follow. I can pinpoint the accounts she tells of her life that I enjoyed and found interesting, but the details upon details of farm life and especially the chickens had my eyes glazing over or my head nodding off.
What I found disappointing was that although she was pregnant when she first started on the farm that detail is only mentioned almost half-way through! And there is almost no details of her pregnancy, labour or moments with her little daughter. It was all about the farm! The extremely hard work on the farm, the hard weather conditions on the farm, the crazy neighbours and their farms, the Indians and their problems, the chickens on the farm, more about the chickens on the farm and so forth.
She and her husband lived like roommates even though they were newlyweds. She describes their life like workmates. Besides her frustration with her husband's oblivion to her feelings about the farm, the author does not delve deep into emotions, whether for her husband or daughter. It was a superficial read for me. In addition, there is much religious profanity, not on her part, but coming from the neighbours. The ending came abruptly and with no new revelations. The book just ended. I was relieved when it did.
I will count this book toward the following challenges: TwentyEleven Challenge, The Dewey Decimal Challenge

Disclosure: I bought this book on Amazon. I was not  told how to rate or review this product.