In Every Heartbeat by Kim Vogel Sawyer 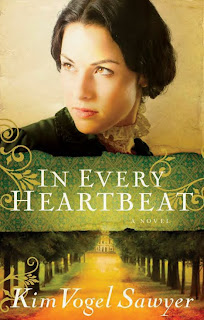 
I thoroughly enjoyed reading this book. It was the first time I read a book by Kim Vogel Sawyer, and I would definitely like to read her work again. The story introduces us to three close friends who grew up in the same orphanage and are now heading off to college. Libby is a feisty, young woman who hopes to become a famous journalist. Pete, who suffered a childhood accident and now wears a peg leg, wants to become a minister. He is also in love with Libby. And Bennet is the tough street fighter who longs for a place to belong.
The author builds these characters so well, I felt I knew them. I was quickly pulled into the story because I liked them and wanted to know more. The themes of friendship, loyalty, morality, family and finding God are dominant in the book. Pete is secure in his relationship with God but not so Libby and Bennet. I found their trials and struggles realistic and poignant. After all, they are all orphans and the loss of their parents, either in death or abandonment affected each differently and profoundly. This was well explored in the story. I also liked the setting – college in the early twentieth century and the brink of WWI. Although the latter didn't affect the story too much, it explained adventurous Libby's desire to be an independent woman with equal rights to report what was happening as a journalist.
The only part that caught me a little off guard was Libby's transformation towards the end of the story when, after a heartfelt prayer, she feels God's presence and has now found God in her life. She becomes too suddenly pious and all-knowing regarding God. Usually, it takes time to acquire spiritual maturity. It requires diligent study of the Scriptures and exercising faith. Although I understood that she found a measure of peace, I missed her impulsive and exuberant self.
I really like the book cover of this book, from the colors to the photo layout. It captures the mood of the story perfectly. Unlike some other books, the woman on the cover does look like the main character. I recommend this book to all fans of Christian historical fiction.
Disclosure: Thanks to Jim Hart from Bethany House Publishers for sending me this book for review. I was not compensated in any other way, nor told how to rate or review this product.