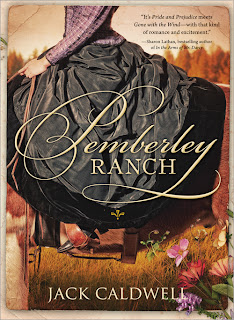 
When I first saw the cover of this book I was immediately attracted to it. Perhaps it's that gorgeous taffeta skirt draped over the horse...
Jack Caldwell's Pemberley Ranch is, we can say, the Western version of Jane Austen's Pride and Prejudice. When I first started reading it, it took some getting used to. But I quickly realized that it's only loosely based on P&P, and the storyline really does stand on its own. Most of it is predictable, of course, but the Civil War aspect was a refreshing change from the usual P&P based novel. I also liked that the author took a different spin on most of the characters, however, I would have liked a little more suspense rather than to have most of what the bad guys were planning spelled out.
Elizabeth (Beth) Bennet is a stalwart Union supporter who lost a brother in the war, whereas William Darcy is an ex-Confederate officer. While Beth can't get past what happened in the war she soon finds out there are always two sides to a story, or in this case, the war. Darcy, on the other hand, seems too perfect throughout the story, showing no ill effects from having fought in the war and suffered as a prisoner of war.
There is profanity and an explicit sex scene in this novel. Also, what happens to one of the young women was sad and life-scarring but was quickly forgotten once the scene moves onto Darcy proclaiming his love for Beth and she agrees to marry him. I felt nothing for them as I was still thinking about the other situation. Would a female author have handled this differently? Perhaps. I would like to think so, though.
If you like Western tales, this one contains most of the elements as there are good and bad cowboys, a sheriff trying to enforce the law, a corrupt judge, greed for land, trouble at the saloon, a deadly shoot-out and some head-strong women. All that was missing were the Indians. So, if it's a Western romance you're itching for with a good cowboy and a sly villain, this one may suit your fancy.
For a chance to win a copy of this book, visit Jack Caldwell's guest post to enter.
Disclosure: Thanks to Danielle from Sourcebooks for sending me this book for review. I was not compensated in any other way, nor told how to rate or review this product.