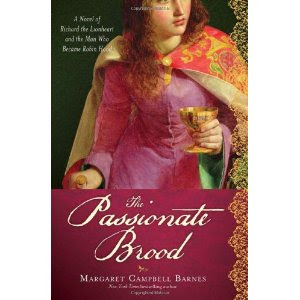 This is a historical fiction first published in 1944 and rereleased in 2010 that tells the story of the real 12th-century Plantagenet family and the folkloric Robin Hood. Eleanor of Aquitaine and Henry II of England are the parents of a rambunctious family consisting of 3 high-tempered girls and 4 boys, who are invariably described as “tall, ruddy, and turbulent “, thus the passionate brood. Robin is purported to have grown up in their midst, been educated like them, though they are proud royal Normans and he is of lowly Saxon birth.

Henry II is a philanderer and soon tires of Queen Eleanor. When Richard discovers his father in a compromising situation, Henry’s temper flares and sends him to Navarre where he meets and marries Berengaria. It is she that gives Richard the nickname “Coeur de lion” – Lion heart. Richard eventually becomes king following the death of both his father and his older brother, the heir to the throne. As King he begins preparations to go on a crusade to save the Holy Land. Robin and Richard, who are the best of friends, part ways as Robin refuses to go on crusade and insists on staying in England. He has a more profane view of the Crusades, “How can the spirit of Christianity be confined in any one city? How can it sanction so much suffering? It seems to me there will be far more urgent crusading to be done here at home.” Robin is unceremoniously parted from the close-knit family when Richard, In typical Plantagenet temper, outlaws Robin, putting a price on his head. Robin, an experienced woodsman takes to the forest and thus begins the tale of Robin Hood.

The rest of the narrative tells of the notoriety Richard gains as a fierce crusader with tireless enthusiasm for the fight to secure Jerusalem. The glamour attached to Richard move soldiers to willingly follow him and forfeit their lives to the cause. In the end, bitterly disappointment awaits him as they are unable to take Jerusalem. Eventually he is shot by a stray arrow and dies in his mother’s presence, without ever producing an heir to succeed him to the throne of England. However, he is the most famous of the crusaders and “Richard’s courage had made the name of Englishman something to be reckoned with throughout the world.”

The author dedicated this book to her son who was killed in the Normandy invasion during World War II. Curiously enough, the Plantagenets traced their ancestry to Normandy and the 1066 invasion of Britain.

Serious history/historical fiction fans may enjoy this rather detailed account that focuses mainly on Richard the Lion heart.


Disclosure: Thanks to Danielle from Sourcebooks Landmark for sending me this book for review. I was not compensated in any other way, nor told how to rate or review this product.