The Vigilante's Bride by Yvonne Harris 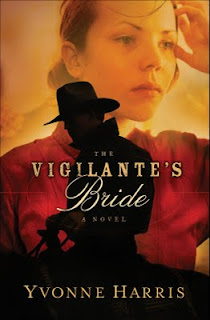 Emily McCarthy grew up in an orphanage and is now on her way from to as a mail order bride. But she never makes it to her wedding since her stagecoach is robbed and she is abducted. And it’s a good thing too because she was going to marry Bart Axel, a nasty man and the enemy of Luke Sullivan, her abductor. Axel is not pleased with Luke and plans to get rid of him, for reasons other than Emily, but things don’t turn out as either of the cowboys planned.

It’s been a long time since I read a Western romance. The Vigilante’s Bride was an entertaining read and I enjoyed it. The romance is predictable, but the setting and the circumstances had me interested until the last page. To tell you the truth, I was waiting for Bart to try to get Emily back or abduct her too—something to build more tension and threaten the budding relationship between Luke and Emily. Axel didn’t bother to get her back, and after their initial encounter, I never felt Emily was in danger from Bart Axel. Things came quite easy for her, as a matter of fact, a little too easy. Emily ends up staying at , another orphanage where she teaches the children and fits right in.
Harris writes about the Wild West with knowledge. I learned a thing or two about cattle rustling, land boundaries and the Crow Indians. It was a wild territory where men took the law into their own hands, including Luke Sullivan. He reminded me of Lucky Luke. I enjoyed the banter between Luke and Emily, which was sometimes silly but mostly downright funny. I wish there had been more of it. Emily wasn’t your typical female and although I enjoyed their spats, there wasn’t enough physical attraction between them. Their first kiss failed to move me, and I didn’t feel it moved Emily all that much either!
Also, I felt the tough, gun-slinging, fast-shooting ex-vigilante cowboy didn’t suit the image of a praying devout person nor, at times, the feisty Emily who was a little too forthright and thought nothing of massaging the naked back of a man, a very intimate gesture. This made me question two things: First: Why would the headmistress of let Emily take care of Luke alone in his room? Propriety was not questioned during several occasions, and I found this a little unrealistic for the late 1800 Christian setting. Second: Wouldn’t an 18-year-old girl with little exposure to society react at the sight of a strapping cowboy’s torso? Not Emily. No elevated heartbeat, no blushing, no obvious attraction. I’m not saying the author should have avoided the situation, but I would have expected some repercussions, whatever they would have been. It would have rendered the story more realistic and served as romantic tension between the couple.
However, I did enjoy the story, and if you like a clean Western romance the story is well written and captivating.
Disclosure: Thanks to Bethany House Publishers for sending me this book for review. I was not compensated in any other way, nor told how to rate or review this product.