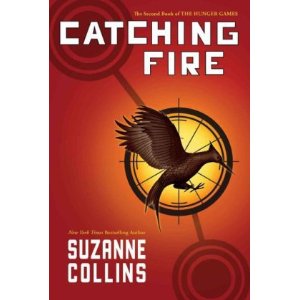 
After reading The Hunger Games, I just had to read the second book in this trilogy. How could I not, after the explosive beginning that gripped me from start to finish? If you haven’t read The Hunger Games, then don’t read Catching Fire yet. It really is a continuation of where the first book left off. Wondering whether to begin this trilogy at all? Read my review of The Hunger Games. It might help you decide if you want to read it.

Things have changed after the Hunger Games, especially after their unheard of and historic ending. Katniss and Peeta return home but victory is bittersweet. Katniss’ relationship with Gale is no longer the same and Katniss doesn’t really know where she stands in her relationship with Peeta. The Capitol is angry and a rebellion is brewing. What’s going to happen? I won’t say, of course, but the stage is set for an explosive ending I’m sure, which is why I can’t wait to read Mockingjay, the last book in this trilogy to see how it all ends.
The suspense builds toward the middle of the book, and as is Collins trademark, there are twists and turns so that you aren’t certain of what will happen until the very end. The characters stay true to who they are, and new ones are introduced. The title suits the story well and is understood only if you’ve read the first book. The ending drops a bomb, leaving the reader suspended and wanting to keep reading. Nothing will be the same from now on. I am desperately hoping Mockingjay will bring it all to a satisfying finale.
If there was violence in the first book, this one has perhaps more because the stakes are higher. Again, as I stated in my review of The Hunger Games, I wouldn’t recommend this for young teens, especially if they are sensitive by nature. It’s not gory violence but psychologically disturbing at times. In a recent interview with Scholastic, Collins is asked this question: The trilogy’s premise is very brutal, yet is handled so tastefully. Was this a difficult balance to achieve?
She answers: "Yes, the death scenes are always hard to write. It’s difficult to put kids in violent situations—Gregor (the protagonist in The Underland Chronicles) is in a war, Katniss is in a gladiator game. Characters will die. It’s not fun to write, but I think if you can’t commit to really doing the idea, it’s probably better to work on another type of story.
Given that, you have to remember who you’re trying to reach with the book. I try and think of how I would tell a particularly difficult event to my own children. Exactly what details they need to know to really understand it, and what would be gratuitous."
I think this clarifies her intentions for writing a story with thematic violence. Apart from that, the story kept me hooked. I look forward to reading the next book, no doubt about it.
Disclosure: I borrowed this book from the library. I was not told how to rate or review this product.