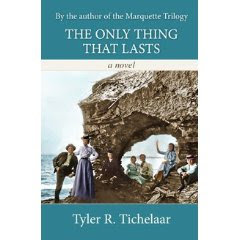 Once again, Tichelaar has spun a great story—a heartwarming, coming-of-age account of Robert O’Neill, the fictional famous novelist first introduced in the Marquette trilogy. Set from 1917 to 1934, amidst the events of WWI and the Great Depression, this book is written as the autobiography of Robert O’Neill, focusing on those early years of his youth when he moved from South Carolina to Marquette to live with his grandmother and aunt after the death of his mother, while his father fought in the war.

I must confess that when I read the Marquette trilogy, which has historical people interspersed throughout its story, I believed Robert O’Neill to be a real person, and I actually Googled his name, trying to find the books he had written. Darn! He’s only a wonderful figment of the imagination that came alive in print. That’s the beauty of Tichelaar’s books; his characters are so realistic you’d think you’d get to meet them one day.
For me, this book was the perfect one to read after I finished reading Superior Heritage (Book 3 of the Marquette trilogy) where the main character meets Robert O’Neill who plays a pivotal role in the satisfying ending of that book. However, The Only Thing That Lasts stands alone. You don’t have to read the Marquette trilogy to enjoy it.
The title of the book refers to a quote from Margaret Mitchell’s Gone With the Wind when Scarlett states emphatically that the only thing that lasts is one’s land. This story touches on how love for one’s land can affect how we live. Robert O’Neill explores his Southern and Northern roots and how both contributed to the person he would become—a great novelist whose novels would make a mark in the literary world. But it is equally about young love, trying to make sense of the world and its events, and ultimately, about finding your place in this vast and ever-changing world.

In addition, this book is a reflection of the author's own love of his birthplace. His quest to bring it alive through his novels has been, in my opinion, highly successful.


Disclosure: Thanks to ReviewTheBook.com for sending this book for review. I was not compensated in any other way, nor told how to rate or review this product.