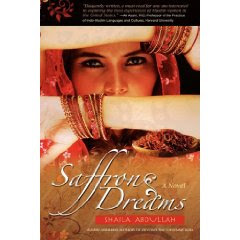 I was immediately drawn to the beautiful cover of this book. It depicts a veiled Middle Eastern woman with sad eyes shielding her face with her bejewelled arms. How appropriate for this novel about a Pakistani-Muslim woman who loses her husband to the tragic collapse of the World Trade Center.

I love novels that are of the multi-cultural genre. And this book is filled with the flavours and traditions of the Middle East. Abdullah’s writing is lyrical and poetic, with a sad tone that permeates this story told from the first person point of view of the main character Arissa Illahi. With flashbacks, we come to learn of her childhood and marriage to Faizan, the husband she knew for barely two years. She is pregnant when he dies and her pain is compounded with the knowledge that her unborn baby will have multiple birth defects.

The whole story is Arissa’s struggle with losses—her mother’s lack of love throughout her childhood, her husband’s death and his unfinished novel, her child’s disabilities, the age-old traditions of her former country, and her lost dreams. Through her eyes we see what she endures as a Muslim woman in the aftermath of the terrorist attacks—the prejudices, the hatred, the misunderstandings, and her guilt for not wanting to return to Pakistan when Faizan wished it.

Throughout, she voices her frustration and philosophy about death and God. It was clear to me that although she believed in God, she lacked faith in Him and struggled with this, too. Arissa also makes it her project to finish Faizan’s novel, no easy task, even though she is an artist and a writer herself. She keeps her husband alive in her heart and fulfills his dream, making it a lasting legacy.

Although this novel received great reviews, I had mixed feelings about it. Overall, it gave me a glimpse into the life of an immigrant Muslim widow in America, mourning her many losses and the decisions she made to cope with them. Sometimes, I had to put the book down and read something else because the sombreness of it was all encompassing. Besides her painful losses, it saddened me that her Muslim faith did not provide comfort or answers regarding death and tragedies. This book also contained mildly explicit sexual scenes and unmarried sex, which I did not expect from a Muslim author.

Disclosure: Thanks to Victor R. Volkman from ReviewTheBook.com for sending this book for review. I was not compensated in any other way, nor told how to rate or review this product.