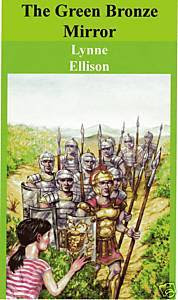 Fifteen-year old Karen is on holiday in Britain when she finds an ancient mirror that transports her back in time 2000 years where the world she knows is under the Roman Empire and she is mistaken for a slave. And so begins a roller coaster adventure in an era where slaves were easily bought and sold, and Christians brutally persecuted. Karen is a spunky character who makes the best of her difficult situation as she makes friends and tries to find a way to get back home.

Young readers are sure to enjoy this book that will give them a taste of what it was like to live during the reign of Nero in the young city of Rome. The story includes a scene at the Amphitheatre where the Romans flocked to quench their sadistic thirst for entertainment. It contains some gruesome details of what happened in the arena for sport. Karen is naturally horrified by what she sees. Her adventure continues as she associates with the first-century Christians. She finds herself escaping to save her life when the Christians are accused of burning Rome.

I noted one historical inaccuracy in this book. The author mentions one of the Christians wearing a cross, which is not possible since this religious icon (as used by Christendom) was only introduced in the third century C.E. and the story setting is 64 C.E. Furthermore, the early Christians did not use graven images in their worship. The book History of the Christian Church (N.Y. 1897, J.F. Hurst, Vol. I, p. 366) says concerning first-century Christians, “There was no use of the crucifix and no material representation of the cross.”

Since this book is a reprint, I wondered if the text was reprinted exactly as it appears in the original version because the font type is small, the dialogue sequence is sometimes confusing and, unfortunately, it is poorly edited. I caught so many typos as well as grammatical and punctuation errors. However, if one looks past all this, The Green Bronze Mirror is certainly worth reading and will be enjoyed by fans of time-travel books.

Disclosure: Thanks to Christopher Posner from CnPosner Books for sending this book for review. I was not compensated in any other way, nor told how to rate or review this product.